The rising insecurity among individuals across the world arising from the many occurrences that take place in the world at present has led the world to search for avenues that deliver any form of solution that eases their pressure. However it is no secret that the search for such avenues is truly a challenge.

Deriving from the experiences we have obtained during the missionary service over the last two decades across India, Thailand, Taiwan, Singapore, Malaysia, Europe and America it had been a realisation that there is a vast majority of individuals who are subjected to a great amount of mental stress. Such westerners tend to seek retrieval and peace of mind in the philosophies such as Buddhism and it’s belief that are rooted in the eastern parts of the world. In a lifestyle where materialism and created illusions took proceedings, such individuals believe that especially philosophies revolving around ‘Theravada’ Buddhism can help them obtain their objective in having piece of mind. The meditation methods, religious counselling are the key methods through which these objectives are reached at.

However a key hindrance to facilitate such services in counselling and meditation is the lower number of Buddhist monks who are the fluent in the English language and subject knowledge. At present it is hard to find proper program or institution that facilitates the development of such proficiencies among Buddhist monks. As a result, it is increasingly difficult to take forward the initiatives taken by prestigious monks such as Ven. Narada, Ven, Walpola Rahula and Ven, K. Sri Dammananda etc.

Talking this requirement into consideration, we decided to establish a training institution, that provides the training to obtain necessary skills required in this mission to serve people across the world through Buddhist philosophy. The proposed institution will be operated under the theme ‘Small is beautiful’ with only five novice monks being trained at any given time. Such focus will ensure that these novice Monks are given the due training to acquire the most necessary skill in spreading the teachings of Buddhist philosophy to ease the pressure of the individuals. Sri Lanka as a nation that lives by this philosophy and as a nation who takes forward the valuable teachings of Lord Buddha takes pride in crafting skilled monks to spread this message across the world as it is an invaluable heritage that can be endowed to the world. 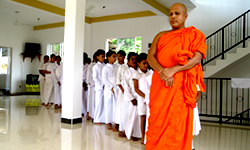 We provide facilities and guidance to practice meditation for the individuals who seek peace of mind and happiness; and gradually bring people to a depth of realization of the Buddha's path of liberation through practice.
We also organize youth retreats, school programs and family retreats.